It’s not every day that a utility gets the chance to not only upgrade its hydroelectric infrastructure, but also play a part in beautifying the city that it lights up. Our contributions to the City of Ottawa’s Elgin Street Renewal project recently provided us with that opportunity.

With underground watermains and sewers along Elgin Street dating back to 1874, it was time to upgrade the underground infrastructure. The City saw an opportunity to bring Elgin out of the 19th century and enhance the streetscape design at the same time. Before being named after Lord Elgin, the street was known as Biddy’s Lane, a primarily residential boulevard that would later be lined with towering hydro poles on both sides of the road. 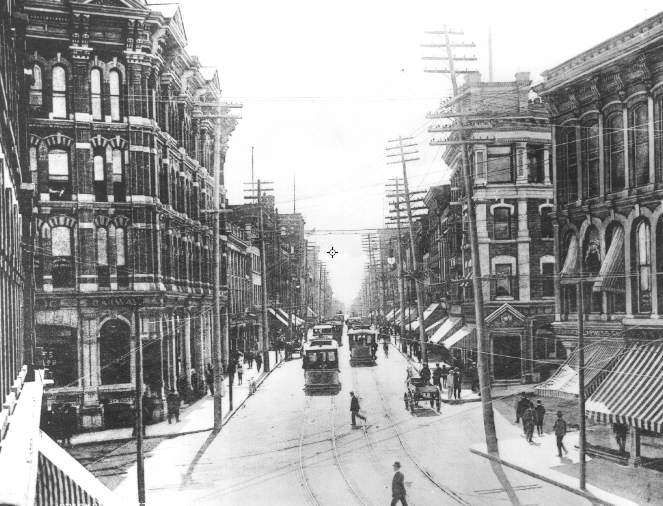 *Sparks at Elgin looking west circa 1898

The design of the Elgin Street Renewal project began in 2016 and included public meetings with residents, business owners and local community groups. As established in the City’s official plan, the goal of the project was to implement the vision of a ‘traditional main street’ with increased walkability and picturesque streets. As you will soon see: mission accomplished!

As Ottawa residents know, Elgin Street was under construction for all of 2019, which included full road closures to traffic along Elgin from Laurier Avenue to Catherine Street. During that time, we installed new underground duct structures and cable chambers. While this stretch of Elgin is only a little more than one kilometre in length, it required almost 28 kilometres of new underground primary and secondary cable.

By April 2020, five new padmount transformers were installed and most of the electrical infrastructure was hidden beneath the street. We were on the cusp of finishing our electrical transformation when COVID-19 struck. Working in coordination with the City, we determined that we could complete the work safely, following all precautionary measures set out by government and public health authorities. In a way, with lighter traffic in the area, it was the ideal time to connect residents and businesses to the new underground system and remove the 35 hydro poles that dotted the west side of Elgin.

Reaching out to the community, we worked with approximately 150 customers to schedule power interruptions at times convenient to them so that businesses could operate and residents could work from home during the day. If you were one of them, thank you for your patience and for playing a part in this big project.

The new underground network provides greater reliability and protection from weather and other external events that could cause unplanned outages.

All said and done, after nearly 12,000 labour hours for electrical construction and design, Elgin Street is almost complete. There are still some finishing touches and light construction by contractors, but we expect the new 21st century Elgin to be a popular spot for pedestrians when COVID-19 restrictions are lifted. If you’re like us and feel like dancing in the street when that happens, we won’t blame you.

Watch this quick video of Elgin’s electrical transformation and pole tear down. And, speaking of dancing: is it just us or do our bucket trucks look like they’re performing their own form of choreography?