The energy future is female

In Canada, women represent approximately one to two per cent of active powerline technicians working in the electricity industry today.

This figure highlights that women are woefully underrepresented in the energy sector, especially in trades and technical roles. In fact, women represent only 22 per cent of workers in all energy jobs.

At Hydro Ottawa, the primary role of powerline technicians is to repair and maintain power supply to our customers. To do this, powerline technicians work to install and maintain overhead and underground infrastructure. When your power goes out, they are the ones that come to the rescue, working hard to troubleshoot, diagnose and restore power. It is a career where gender diversity can and should exist.

Research shows that gender diverse workplaces thrive, and are more innovative and financially successful. So in an evolving field like energy, why can't the industry attract female talent? According to Electricity Human Resources Canada, some barriers that women face include discrimination, a lack of mentorship, and a non-inclusive workplace culture.

Hydro Ottawa employee Lana Norton, who is also the Executive Director and founder at the not-for-profit Women of Powerline Technicians, graduated from Cambrian College’s Powerline Technician program in 2010. At the time, she was carving a path for women in the field as the second woman to attend and complete this two-year apprenticeship curriculum.

“I think that the energy sector has been doing a great job recently in demonstrating and communicating that women are here, and that we're successful,” says Norton. “We've seen some brilliant initiatives like Algonquin College’s "We Saved You a Seat" program, where it reserves 30 per cent of the spaces for women in the top five STEM programs, with Powerline Technician being one of them.” Intentionality through programs and marketing like this helps embolden women with a vision for STEM related careers.

And so do stories like Lana’s: With a decade of field experience in Canada’s electricity sector, Norton has held progressive roles in distribution operations, moving from an apprentice powerline technician, primarily stationed in the east-end of the city, to a city-wide field operator role, where she gained experience with Ottawa’s electricity grid working on the 24/7 crew.

Norton says she enjoyed gaining an appreciation for the overall view of how Ottawa’s electricity grid worked together despite its geographic and technical differences, and seeing first-hand how power moved throughout the city. From there, she took on a field technician role, helping to plan and build large pole lines. Today, she’s the Supervisor of Metering Field Services.

“As I look to the future, I'm really excited by distributed energy resources and what they bring to our grid capabilities,” says Norton. “I would like to contribute in a larger way to the multilateral grid sustainability movement and to energy policy. For now though, I'm enjoying my time with the metering team.”

Norton believes that the conversation that is needed to encourage more women to choose trades and technical careers is how rewarding, innovative and future-oriented the profession is. “We’re building energy systems to power the future, we’re advancing smart grid technology for net-zero communities, and we’re investing in energy storage.” Fortunately, this value-proposition is something that connects to today’s youth; with many young people passionate about climate change and a sustainable energy future.

“As leaders, we need to be mindful of the knowledge this next generation is bringing to the workforce,” says Norton. ”They have a lot of insight and ideas on how to transform our industry, and with more diverse voices and perspectives, we’ll be better for it.”

With Canada’s skilled trades labour shortage, Norton encourages female talent and change-makers to be part of the energy future. “To women, I would say that now is the time to get into skilled trades, and that yes, you are absolutely able to do this work,” says Norton. “A trades or technical career in energy, provides you with financial stability and likely the lifestyle and challenge that you’re seeking.”

Asked if she could turn back time, what would she tell her younger self? She responds, “I would tell her that she’s going to enjoy the person you become and you’re going to be fiercely independent.”

To learn more about Lana, her experiences in the field, and her organization Women of Powerline Technicians, listen to our full in-depth interview on the ThinkEnergy podcast here. 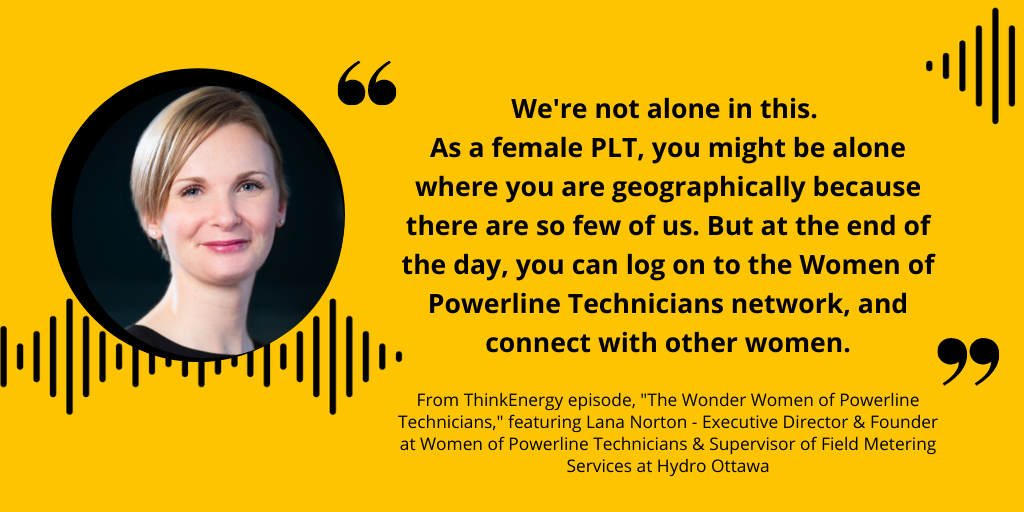