A journey through the grid: From creation to you

Akin to the longstanding Canadian television series “How it’s Made,” we’re about to take you on an electric adventure to understand the journey of electricity. There is literal and figurative power in being able to flick a switch to turn the lights on, so let’s take a look at what makes this possible.

For those of you who were following along last month, you’ll know that we featured substations and how they work - an essential checkpoint of the electricity journey. This month, we’re honouring National Electricity Month by taking you through a summary of the entire process: how electricity is created and the journey from its generation to how it powers your home or business.

Getting started: The generation stage

In order for the journey to begin, electricity must first be generated. Under its subsidiary Portage Power, Hydro Ottawa owns and manages a portion of the energy generated to power our nation’s capital, including six hydroelectric generating stations at Chaudière Falls on both the Ontario and Quebec side. For the remainder of the power required for the city, electricity is drawn from the Ontario provincial grid - this electricity is generated in a variety of ways based on Ontario’s supply mix (i.e. nuclear, wind, solar, etc.).

Environmental sustainability is a central focus at the generation stage. In total, Hydro Ottawa has 128 megawatts (MW) of installed green generation, which is enough clean energy to power 107,000 homes annually (or one third of the city of Ottawa). This green generation infrastructure consists of 16 run-of-the-river hydroelectric facilities in Ontario, Quebec and New York State, eight large solar installations, and two landfill gas-to-energy plants.

Hydroelectric dams generate electricity by controlling the flow of water stored in a reservoir. When that water is released from the dam, it flows through a turbine which results in the creation of kinetic energy. At the Chaudière Falls generating station, there are four turbines that the water passes through. As the blades of these turbines spin, they power a generator converting the kinetic energy into mechanical energy.

Preparing for landing: The distribution stage

The end of the journey: your home or business

Yet again, the electricity must be stepped down to a much lower voltage (120 or 240 volts) so that it can be safely consumed through typical household and business electrical services. In order for this to happen, electricity passes through a transformer which is either mounted on a pole (diagram) for overhead distribution networks, or on a concrete pad for underground distribution networks. Transformers like these typically serve 10 or more homes.

From a distribution transformer, a wire feeds 120 or 240-volt electricity to your home or business. At the connection point, the electricity passes through a meter measuring how much electricity is consumed and then it goes through an electrical panel containing breakers and fuses that protect internal wiring from becoming overloaded.

As a GPS would say, “You have reached your destination.” The journey is complete and your electricity has arrived! Now, you can freely turn on switches and plug in your devices to your heart’s delight. Feeling fired up about this adventure? We invite you to go and flick a switch on and off right now, just to celebrate that all of this is possible. We also invite you to learn more about this journey by taking a virtual tour of Chaudière Falls. 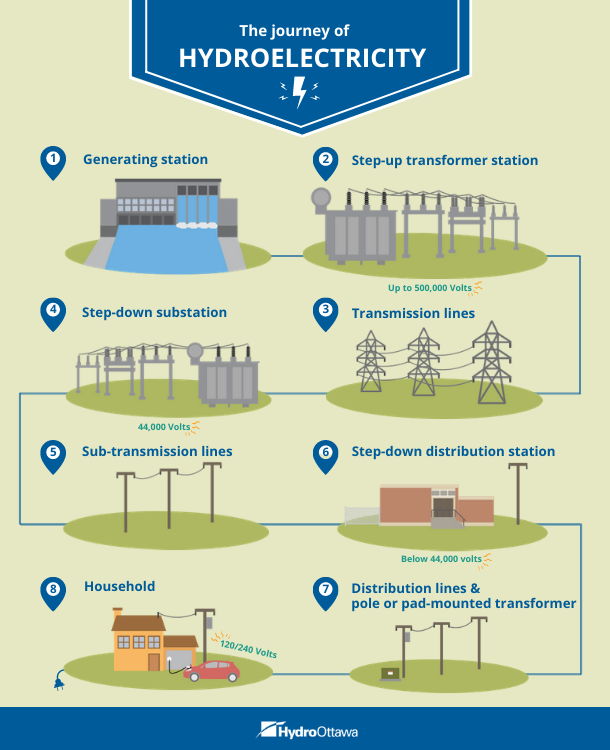