If 2022 had an outage theme song, it would be “Working for the Weekend” by Calgary’s own, Loverboy.

As you’ll notice from our list, the biggest outages of 2022 all occurred on weekends. Causes were consistent across the board and included a combination of severe weather events damaging our overhead infrastructure, loss of supply from the provincial grid, and underground cable faults. In most cases, our five biggest outages featured a combination of at least two of these three causes.

We also experienced more outages in 2022 than we did in any year in recent memory. In 2021, our field crews responded to 1,341 outage events across the city. Due to the reasons listed above and explained below, our crews responded to 2,163 outages in 2022. This whopping increase is mostly driven by the derecho storm in May, which was responsible for more than 1,000 simultaneous outages across our service territory.

It’s probably no surprise that the derecho was our number one outage this year, so let’s get started. 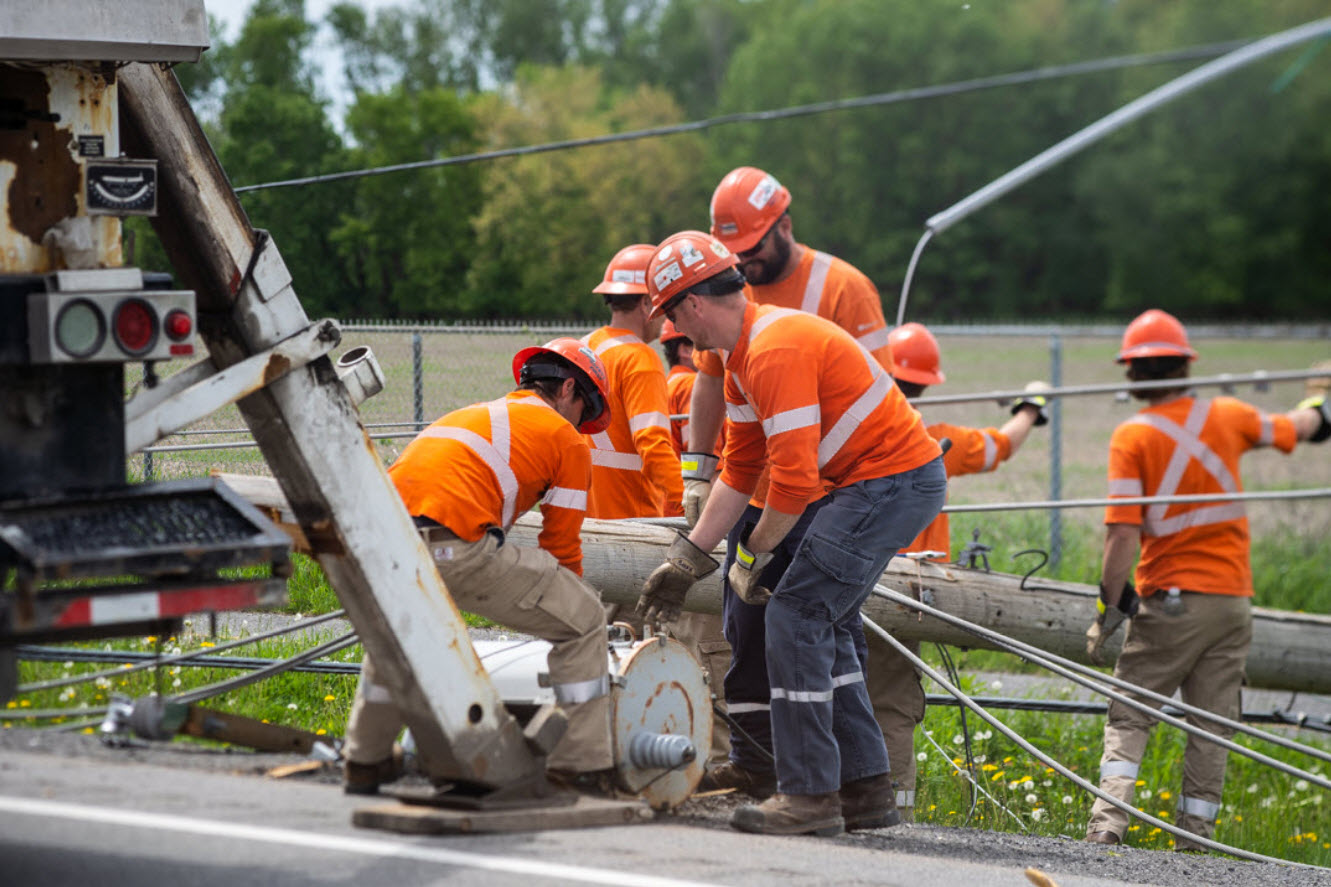 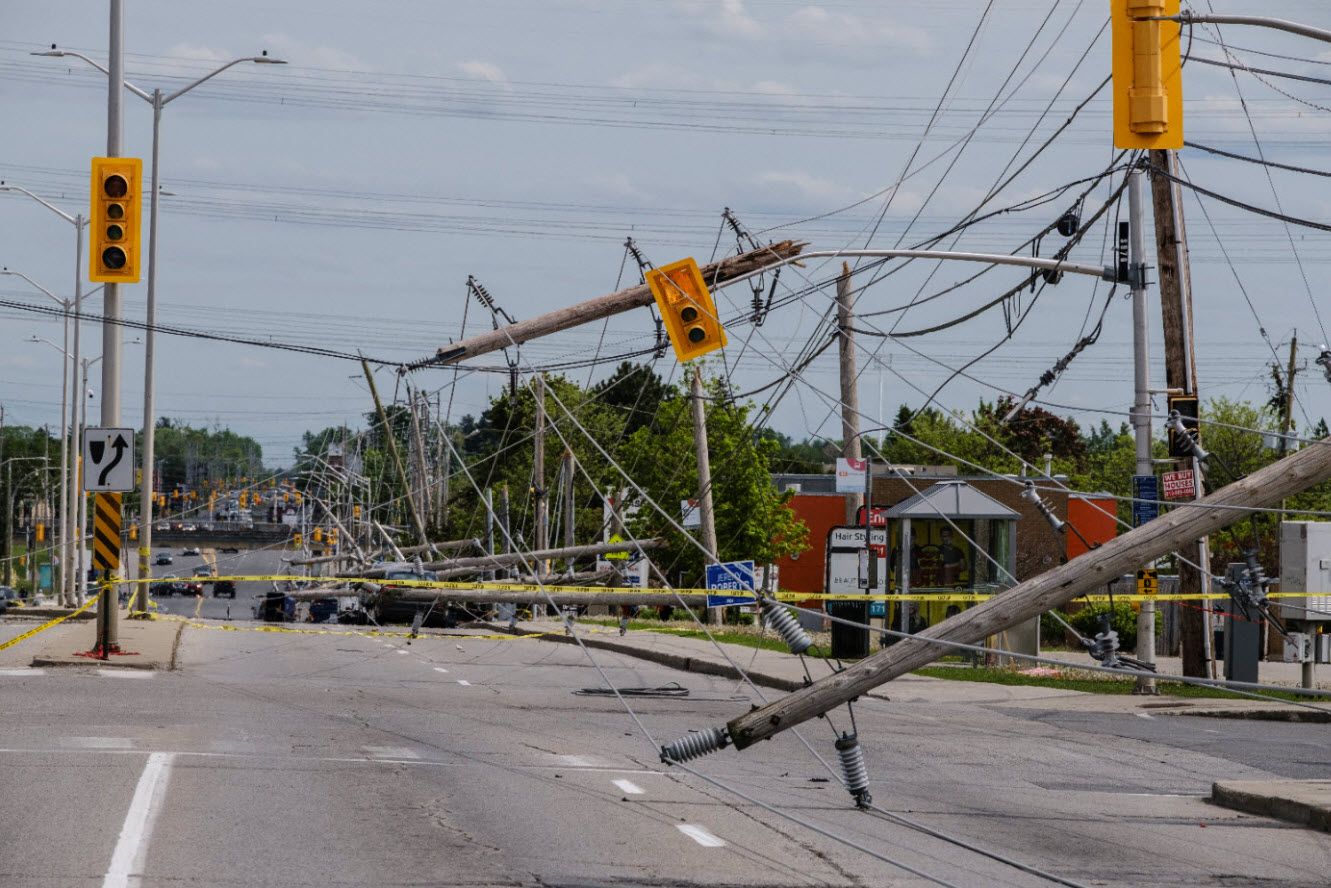 With winds up to 190 km/h, the powerful derecho storm devastated Ottawa at 3:36 p.m. on Saturday, May 21, and left a trail of destruction like nothing Ottawa had ever seen or experienced before. From severe damage to property and Ottawa’s urban forest, the harm to our electrical infrastructure made this storm our biggest yet; significantly worse than the 1998 Ice Storm and the 2018 tornadoes. That’s saying something.

This led to 180,946 customers losing power on the day of the storm, plus an additional 11,528 customers impacted for days following due to damage to our electrical system. A staggering 54 per cent of our customers were without power at some point during this major event.

The historic storm toppled Hydro One transmission towers (causing loss of supply from the provincial grid), damaged more than 400 hydro poles, and snapped kilometres of power lines. In total, we had more than 1,000 simultaneous power outages across the city. While we were able to restore power to 50 per cent of affected customers within 48-hours, many remained out for days, and a few dozen customers were out for nearly two weeks because of damage to their individual home electrical systems.

The restoration effort was so massive an undertaking that it was the equivalent of doing four years worth of construction work and emergency repairs in 14 days. Further complicating matters were the many downed trees, branches tangled in overhead wires and fallen debris in customers’ backyards, as well as the labour-intensive work of replacing or repairing every hydro pole that was damaged across our 1,100 sq/km territory.

According to the Weather Network, more than 40 per cent of Canada’s population was impacted by the May long weekend storm. That’s because the storm roared through three of Canada’s four biggest cities in the most populated part of the country, causing 1,000 kilometres of damage and power outages to an estimated 925,000 households (from the border of Michigan to Quebec City).

In short, this storm broke all of our records.

Our Control Centre became alerted about a potentially threatening weather pattern heading our way the week leading up to Christmas 2022. Multiple sources confirmed that a North American storm stretching 3,000 kilometres from the Gulf of Mexico to James Bay was likely to have a big impact locally. We relayed the bad news to staff, contractors, specialists and arborists that they may be required to provide emergency response over the holidays should the storm hit Ottawa as predicted.

Environment Canada was calling it a ‘once-in-a-decade’ storm.

Before the storm hit Ottawa, we watched as the northeastern United States faced down wild weather with blizzards, damaging winds and freezing temperatures causing havoc for holiday travelers. Thousands of flights were cancelled and highways were closed with stranded motorists and multi-vehicle pile-ups.

Customers with email addresses on file received our Weather Watch notification in their inbox the afternoon of Wednesday, December 21, warning them that fierce winds and power outages were expected due to the severity of the incoming storm.

As predicted, the storm arrived late Thursday evening. And just like an uninvited relative visiting over the holidays (looking at you, Cousin Eddie), the storm had overstayed its welcome by Christmas day. But unlike the derecho in May, which was violent and short-lived, this windy, wintry storm seemed like it would never leave.

The storm impacted our distribution system starting on December 23 with the first outage taking place at 1:01 a.m. A total of 130,590 customers sustained interruptions and 22,006 customers experienced momentary outages, for a total of 149 outage events between December 23 and 24. By noon on December 23, 50 per cent of impacted customers were restored (excluding those affected by loss of supply from the provincial grid). But by 1:30 a.m. on December 25, all customers had their power returned (just in time for Santa’s visit).

On June 18 at 12:13 p.m. an underground cable fault occurred with Hydro One’s transmission supply, resulting in a loss of supply to six of our substations in Nepean and the city’s west-end. This led to 27,405 customers (or 8 per cent of our customer base) without power. Hydro One takes these outages seriously, leading to usually quick response times and, often, short outages. Power was restored to 90 per cent of customers within 2 hours and 40 minutes.

Loss of supply refers to issues impacting Hydro One’s transmission system, which can then impact our distribution system. We rely on them to deliver a portion of Ottawa’s power from the provincial grid - however, if a problem with their system comes up, our customers can be affected - even when there’s nothing wrong with our system. 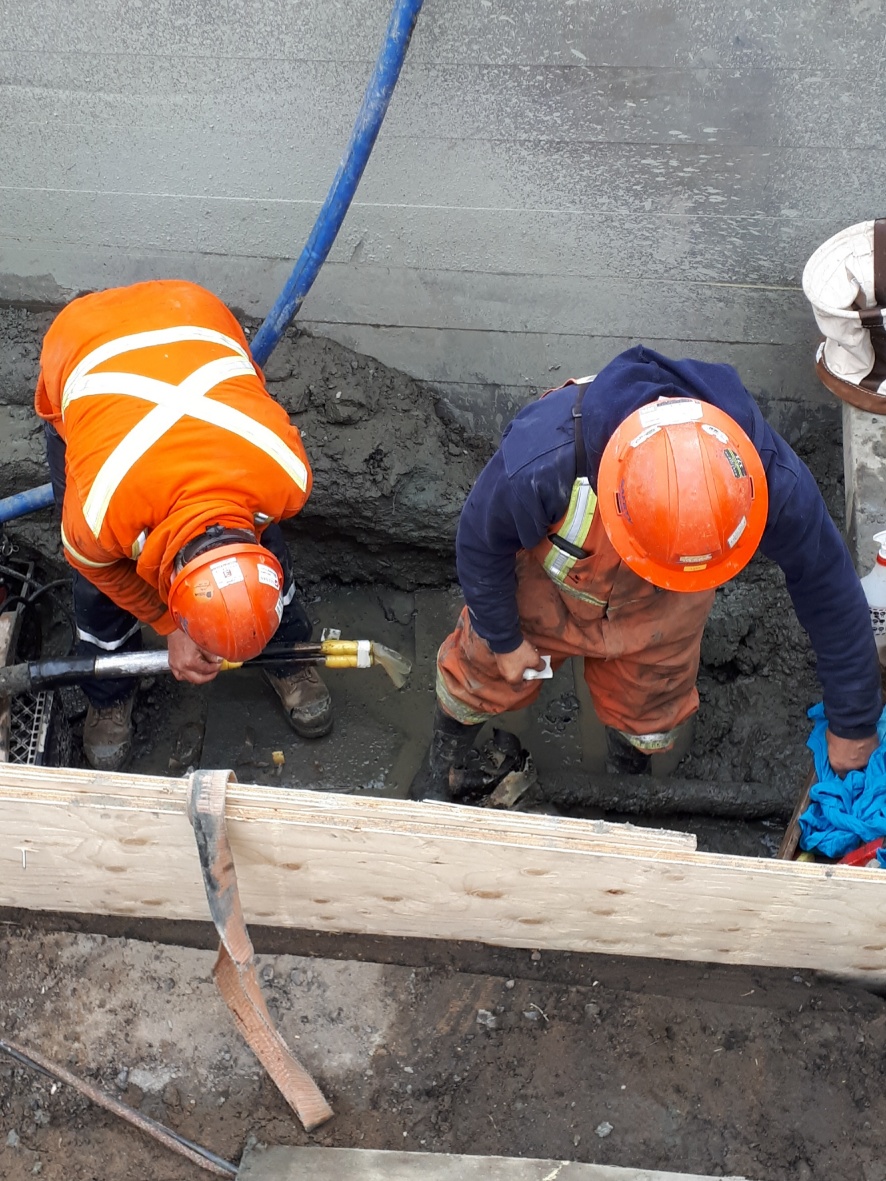 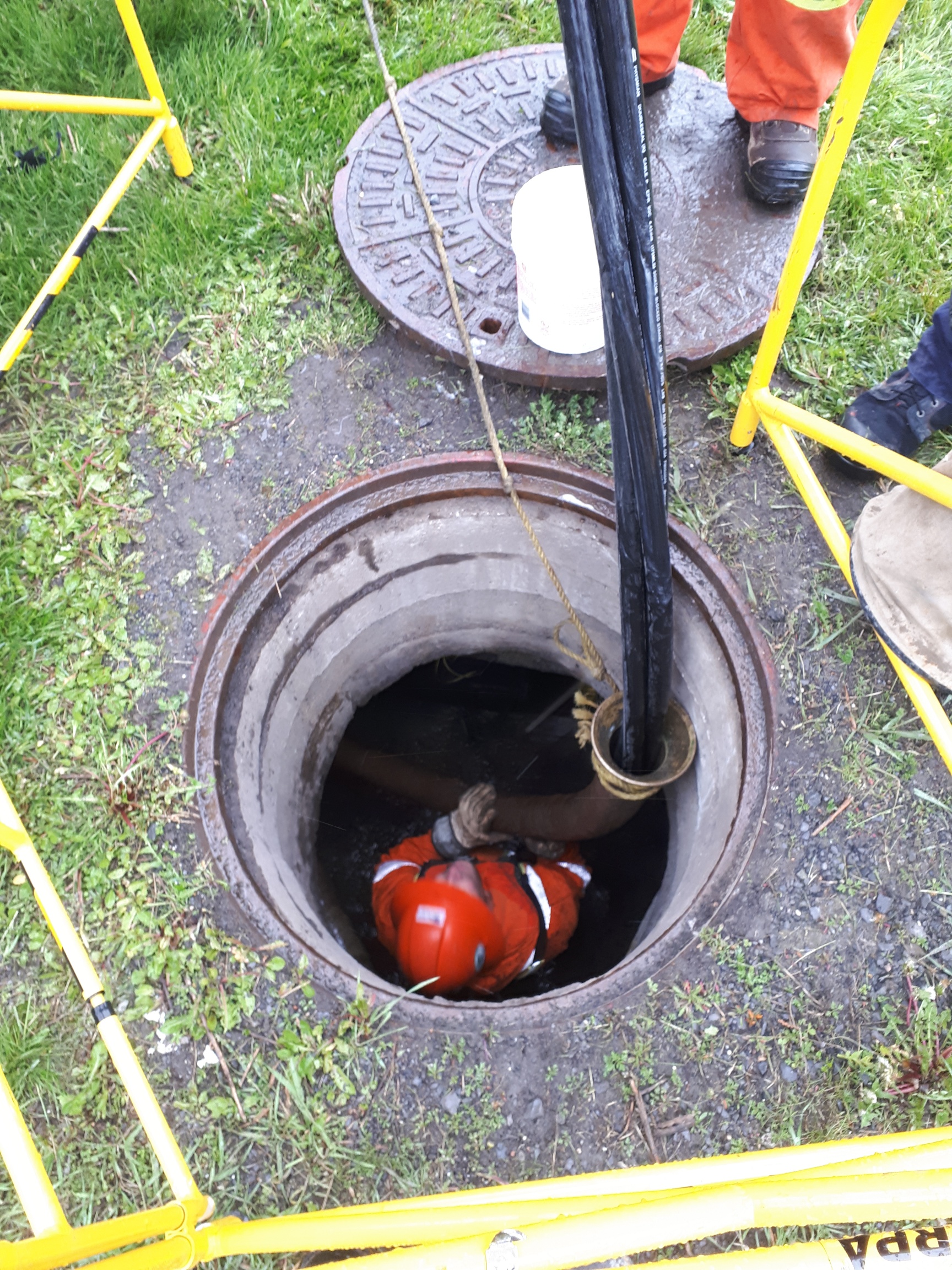 More than 3,600 customers were without power on November 6 when an unplanned outage occurred in the city’s east-end due to an underground cable fault. Originating on Bilberry Drive, the outage also impacted Jeanne D’Arc Boulevard and Orléans Boulevard for more than two hours.

When it comes to buried hydro lines, repairs generally come with lengthier downtimes compared to overhead systems (derechos notwithstanding). That is because outages caused by underground equipment issues, whether planned or unplanned, require much more intricate work. Even the smallest repair requires street excavation which inevitably leads to road closures, streetlight outages, traffic delays and more. To learn more, read our overhead vs. underground blog.

Finally, our last big outage of 2022 was another loss of supply from the provincial grid. This one occurred at the Hydro One station in the Village of Casselman on August 20. The outage impacted the entire Casselman region, resulting in 2,000 customers without power for more than three hours.

Like other local distribution utilities in the province, we rely on power from the Ontario grid. When there is an issue with the provincial system, it is generally beyond our control.

Historical fast fact: Some Ottawans may not be aware that residents in the Village of Casselman are our customers. After the new amalgamated City of Ottawa came into effect in 2000, Hydro Ottawa was formed from the city’s predecessor utilities including Ottawa Hydro, Kanata Hydro, Goulbourn Hydro, Nepean Hydro and Gloucester Hydro. Casselman Hydro joined Hydro Ottawa in May 2002.

We know that outages are not fun, which is why we are incredibly grateful for your patience whenever they occur. No matter the cause, our crews are always on stand-by to get you reconnected. If you’d like to receive our Weather Watch alerts, please ensure we have your email address on file.

To learn more about how we are working to future-proof Ottawa’s electricity grid, head over to our blog to find out what we’re doing to prepare for extreme weather and prevent outages. You can also read up on how we tackle damaging winter storms here and how you should prepare.

Here’s hoping we avoid the rising trend of large outages (and working weekends) in 2023.